Today, the vapor absorption cycle is used mainly where fuel for heating is available but electricity is not, such as in recreational vehicles that carry L.P gas. 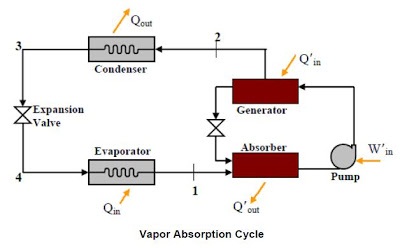 It is also used in industrial environments where plentiful waste heat overcomes its inefficiency.

The absorption cycle is similar to the compression cycle, except for the method of raising the pressure of the refrigerant vapor.

In the absorption system, the compressor is replaced by an absorber which dissolves the refrigerant in a suitable liquid, a liquid pump which raises the pressure and a generator which, on heat addition, drives off the refrigerant vapor from the high-pressure liquid.

Reflection of Light by Different…

Taking down the biggies and how…