It consists of mainly two parts, the cast iron block and bush; the bush is made of soft material such as brasss, bronze or gunmetal. The bush is pressed inside the bore in the cast iron block and is prevented from rotating or sliding by means of grub- screw as shown if the below figure. When the bush gets worn out it can be easily replaced. Elongated holes in the base are provided for lateral adjustment. 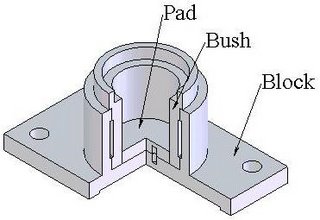